The fight continues in East London

The pro-life fight in East London continues. Last Saturday (10th November) the Helpers of God's Precious Infants held their second vigil outside the Bpas abortuary in Stratford. The campaign against Bpas in Stratford has been going since August 2011 (see the links at the bottom of this post). It has involved several pro-life groups, local residents, Catholics, Evangelicals, Muslims, and people of no religious affiliation, consultant doctors, paediatricians, GPs, nurses, medical students, barristers, the retired, retail assistants, tradesmen, office professionals, mums, dads, grandparents - people coming from every walk of life. It has received wide coverage in the Guardian, the Newham Recorder, Islamic news outlets, blogs, websites, and Christian Radio.

We learnt a week before that a pro-abortion counter protest had been organised by a casual group under the name "Newham: Abortion, a woman's choice". This group began with a Stratford street stall in support of the Bpas centre, and was later advertised at an Abortion Rights meeting in Westminster. Emails were sent by pro-lifers encouraging people to make a special effort to come to the vigil for the unborn and their parents. It was short notice but the turnout was good.

I set off early on Saturday morning, and headed to Stratford via the DLR and tube. I learnt by the end that one woman had travelled all the way from Southampton! The day started with Mass (the Helpers group is a Catholic pro-life apostolate). After Mass we set off. We processed through the street, praying the rosary. The procession was headed by a very large image of Our Lady of Guadalupe.

We were about 50 in total. When we arrived at the Bpas abortion facility, the pro-abortion demo was already there outside the Bpas, which was closed that day. However, a handful of pro-abortion demonstrators were standing behind a police van in the location agreed for our vigil, so we had to stand further away down the road.

One of the pro-life vigil organisers informed the police that a counter-demo had been organised. On the day, the police were asked whether the pro-abortion demonstrators had applied and received an official permit to hold the demo. The policeman replied "that's none of your business". Make of that what you will. If the pro-abortion group didn't ask for a permit, it wouldn't surprise me, as we witnessed a whole series of very unprofessional and ill mannered displays by them on the day. The prayer vigil was conducted peacefully, calmly, and without fuss. The footpaths were always kept clear for passersby. The police didn't stand anywhere near us the whole time. Instead, they stood by and around the pro-abortion demonstrators for the entire time, and even parked their police van in front of them. There was 25-30 of them in total, so we managed to outnumber, and certainly out-pray, them. 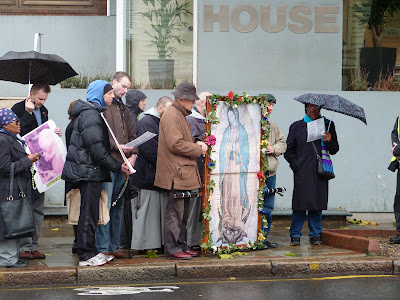 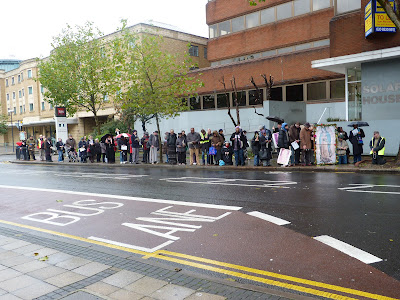 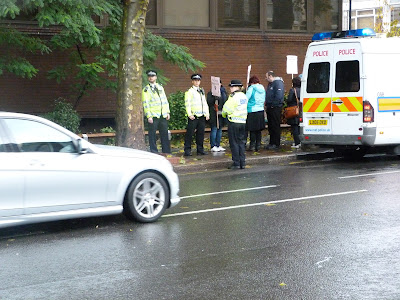 About 5 pro-abortion protesters surrounded by 3 police and a police van. 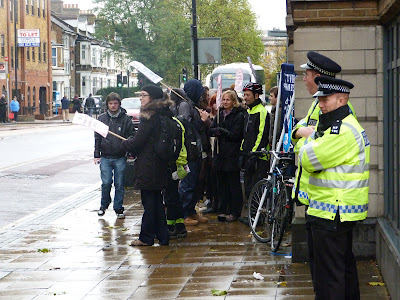 The main pro-abortion group outside Bpas, about 25 in total.

They had to be told several times to stop blocking the footpath. They had placards, a large blue banner saying "Tower Hamlets: British Medical Association", and a megaphone.

It was appalling that they spent several hours from 9.30am - 11.30am screaming and shouting through the megaphone, chanting, swearing, and being obnoxious. They were right under the windows of the homes of people who live in the block. These are people with "complex needs" like mental ill health, disability, addictions. Moreover, some of the people have small children. What utter lack of consideration 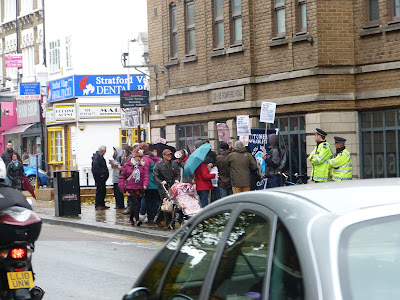 The irony of a mother and father with their small child in a pram passing by people who have taken the time to protest in favour of killing children. 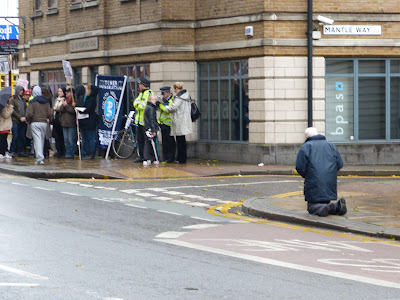 One of the organisers of the pro-life prayer vigil kneels down to pray, which is done while the group meditates on the death of Jesus on the cross. Not content with spewing profanities against people across the road praying, not content with complete disregard for the people living in nearby homes, not content with defending the wicked killing of innocent unborn children, they decide to turn their noise against an elderly man praying. 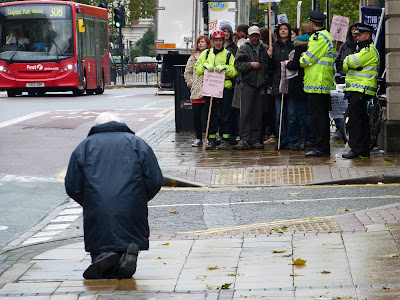 Here he is, praying. Who knows what went through the minds and hearts of those people demonstrating for abortion? It must have been a powerful contrast for them and the police to witness 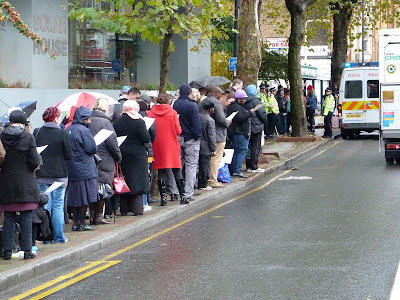 Side view of the prayer vigil. You can see the police and the police van surrounding the pro-abortion demonstrators. That was the agreed location for the pro-life prayer vigil, but they got there first. The pro-lifers sang a few hymns - no disturbance to the local residents as we were across the road and largely drowned out by the constant passing of cars, buses, and lorries. 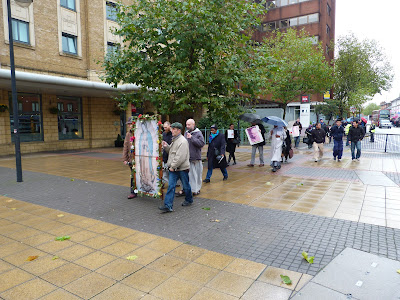 After the prayers had finished we processed back. 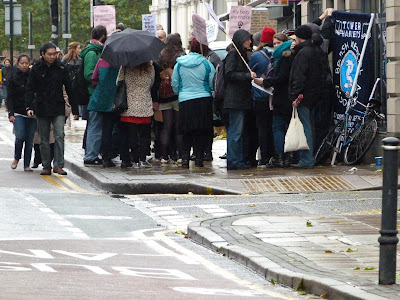 I was at the back of the procession. I turned to take a few more snaps, and was not surprised to see the pro-abortion demonstrators carrying on their lack of consideration for others. They completely blocked the footpath, so people had to walk in the street as cars and buses passed. 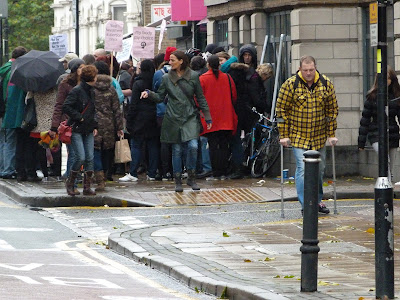 I had to switch the camera off as the battery was running low, so I missed this poor chap on crutches having to walk in the street as no one moved to let him pass. 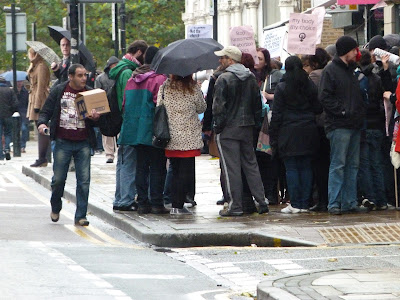 Yet more people having to walk in the street. Maybe the demonstrators were too busy congratulating themselves to give a stuff about others. "Our footpath, our right to decide what we do with our footpath" "keep your feet off our street"? 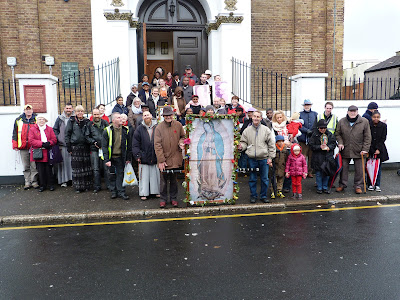 Group photo at the end. the organisers kindly provided lots of refreshments for us all in the hall. Well done and thanks to those who came and supporting the vigil on the day. You can find out all about what's been happening in east London by clicking on the links below.
Posted by Dan B at Thursday, November 15, 2012