Abortion and disability: some recent updates 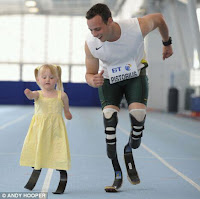 Regarding abortion for disability, section 1(1)(d) of the Abortion Act 1967 (ground E) as amended, says: "there is a substantial risk that if the child were born it would suffer from such physical or mental abnormalities as to be seriously handicapped." This is an appalling eugenic clause in the Abortion Act. It is also one of the grounds for which abortion up to birth is permitted. 92% of babies prenatally diagnosed with Down's syndrome are killed by abortion. This has remained consist since 1989 when the National Down's Syndrome Cytogenetic Register began. There is also the fact that false positives happen: a prenatal test infers that the child has a malformation, when in fact the child has no such condition.

The Department of Health abortion statistics for 2011 (published in May 2012) states the following hearbreaking statistics (emphasis mine):

Congenital malformations were reported as the principal medical condition in nearly half (45%; 1,046) of the 2,307 cases undertaken under ground E. The most commonly reported malformations were of the nervous system (23% of all ground E cases; 540) and the musculoskeletal system (7%; 160). Chromosomal abnormalities were reported as the principal medical condition for just over a third (39%; 889) of Ground E cases. Down’s syndrome was the most commonly reported chromosomal abnormality (22%; 511). As in each year since 1999, fewer than 10 abortions under ground E in 2011 were associated with rubella.

For abortions at 22 weeks or beyond, feticide is recommended prior to the evacuation of the uterus to stop the fetal heart. In 2011, of the 1,264 abortions performed at 22 weeks and over, 72% were reported as preceded by a feticide and a further 25% were performed by a method whereby the fetal heart is stopped as part of the procedure. 2% of abortions at 22 weeks or beyond were confirmed as having no feticide. For the remaining 4 cases, at the time of publication, we had not been able to confirm whether feticide had been performed. 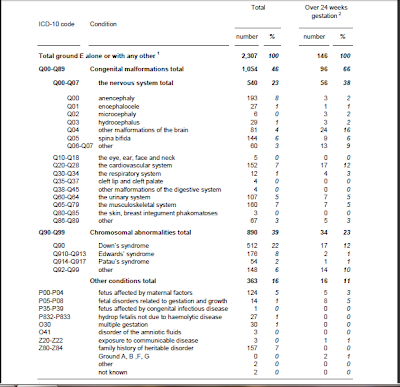 Recently in the House of Lords a question was asked about abortions performed at 24+ weeks gestation. A second question asked how many disabilities used to justify an abortion at 24+ weeks gestation were rectifiable:
Good probing questions, but let's be clear: whether a disability is rectifiable or not, eugenic abortion is eugenic abortion. Chromosomal conditions such as Down's syndrome, Edward's syndrome, Patau's syndrome, and Turner's syndrome are not rectifiable, but that does not mean killing those babies was less grave, or more justifiable.

Babies diagnosed with anencephaly cannot be cured, and will sadly die within a short time after birth, but that does not mean it is better to kill them before they are born. These babies still have equal human dignity, and killing them disregards this dignity. It also denies parents the chance to spend the few moments available with their baby before he or she passes away.

It should go without saying that babies with non-rectifiable congenital malformations have the same dignity and right to life as people without a congenital malformation, or  one that is rectifiable. In this country we also kill babies if they have a cleft lip and palate, or a clubfoot. 144 babies were killed because they had Spina bifida in 2011, yet the NHS website says:


"over recent years, advancements in the treatment of Spina bifida have resulted in a more positive outlook for the condition. Today it is likely that children will survive into adulthood. Spina bifida can be a challenging condition to live with, but many adults with the condition are able to lead independent and fulfilling lives."

We wouldn't kill a 6 month old baby because she had a cleft palate, or a toddler because she were missing a limb, or a teenager because they had Down's. Nor should we kill children at an earlier stage of development because of their having these conditions. However, we do know that disabled newly-born children are neglected to death both here and in The Netherlands.

It should also go without saying that it must be very difficult for parents who are told that their child will have a disability. However, they should be offered every support and not have abortion suggested as a solution, way out, or compassionate thing to do. It is a perversion of the medical profession and of parenthood to suggest, consent to, and carry out the killing of children, in the womb or outside it. Charities and associations exist which are exclusively focused on supporting people with these sorts of conditions, their parents and carers. Specialist medical, pastoral, and educational services are available.
In reply to the questions asked, the Parliamentary Under-Secretary of State, Department of Health (Earl Howe) answered:


There were 146 abortions performed in 2011 (the latest year for which data are available) with gestations of 24 weeks or more. The department does not collect information on whether or not a disability is rectifiable when a termination of pregnancy is carried out under Section 1(1)(d) of the Abortion Act 1967 (as amended).

The condition cited is identified in accordance with the International Statistical Classification of Diseases and Related Health Problems codes (ICD10). This classification does not separate out those conditions that are potentially rectifiable from those that are not. Two medical practitioners must certify that they have reached an opinion formed in good faith "that there is a substantial risk that if the child were born it would suffer from such physical or mental abnormalities as to be seriously handicapped".

In the UK we have abortion for social reasons virtually on demand in early pregnancy, and abortion up to birth for other reasons. 200,000+ abortions every year testify to that fact. The Abortion Act is a terrible piece of legislation and an unjust law. 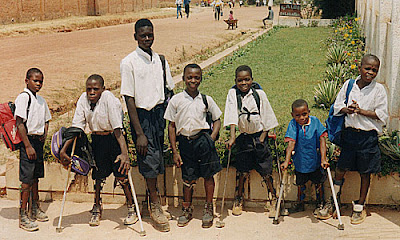