Yeehaw watch out for "American tactics and American money"

The bastions and luminaries of the abortion lobby in the UK never tire of warning us about the dangers of "American tactics" "American money" "the Americanisation of the abortion debate in the UK" and "links to American anti-choice groups". Indeed, words such as "George W. Bush" "Palin" "Santorum" "conservative" "religious right" "republican" and worst of all "Texas" can induce frenzies and frothing at the mouth amongst the most stalwart defenders of an abortionist's right to vacuum out a child from the womb of his or her mother, and make a tidy sum doing it. I'm surprised we haven't seen flag burnings outside the American embassy and calls for boycotts of hamburger sellers because they harass the obese.  Or maybe not. You see, it's not so much about America and Americans, as it is about the right sort of American. It's about the right sort of company-keeping. 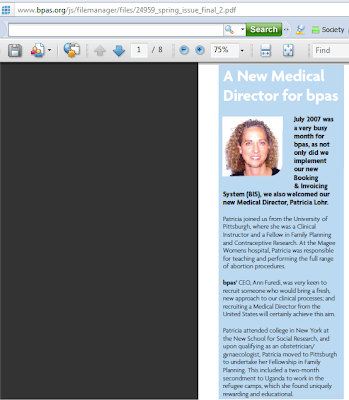 Dr. Patricia Lohr is chief abortionist at Bpas. Dr. Lohr comes from.....comes from.......America! She was recruited in 2007. Dr. Lohr trained as an abortionist in New York and Pittsburgh, both cities in America. The screen shot above comes from the Bpas Spring 2008 newsletter proudly announcing that Bpas has recruited an American to head-up its abortions. To quote Bpas "CEO Ann Furedi, was very keen to recruit someone who would bring a fresh, new approach to our clinical processes; and recruiting a Medical Director from the United States will certainly achieve this aim" - we bet it has, Bpas. I wonder why we don't hear pro-abortion bastions like Abortion Rights and the Guardian bewailing Bpas for importing Americans!?

This screen shot above, taken from the Bpas research page, shows that in 2009 Lohr et al conducted a survey about disposal of "fetal tissue" - to you and me that's the dead bodies of the unborn that Bpas have killed, but "fetal tissue" just sounds so much more respectable. This survey was lead by Lohr - an American - and funded by the Society for Family Planning....

....Oh no, watch out, the Society for Family Planning is an American organisation! They gave Lohr $12,896 big green American bucks to do her survey. That means Americans have given American bucks to an American to carry out abortion related surveys in the UK. Is Abortion Rights and Education for Choice happy about this? Probably, yes. It's the right sort of American people doing the right sort of thing, so it's fine. Below is the screen shot of the postal address of the Society for Family Planning, with the URL across the top, just in case there was any doubt. 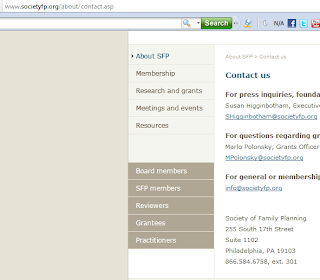 And finally, below is a screen shot taken from Abortion Review, the online publication of Bpas. On Wednesday 7 February 2012 Bpas held a lecture titled "Abortion in the US: popularity, Politics, and Practice" (obviously they are keen to prove their right-sort-of-American-loving-values). Not stopping there, they flew an American, Professor Carol Sanger from Columbia Law School (no relation to Margaret Sanger, the shared surname is just an unhappy coincidence) to give the presentation. Was there an uproar? Did any abortion activists hold a protest? No, because it's the right sort of American saying the right sort of thing, so it's smiles all round. 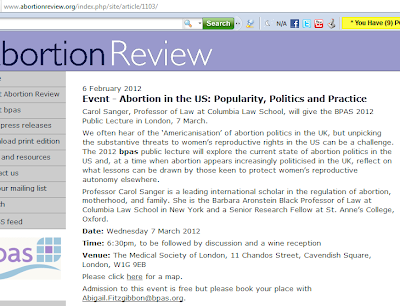 So, when abortion campaigners, activists, and journalists start warning us about "Texan cowboy anti-choicers bringing their tactics to sunny England" you might want to politely tell them that their "we're-moderate-reasoned-let's-have-a-dialogue-British-who-want-dialogue-about-dialogue-over-a-cup-of-tea-people-who-are-concerned-about-choice-let's-not-become-polarised-about-this-as-we-continue-to-kill-570-unborn-children-a-day" mantra has worn very thin. You could throw in the fact that Bpas has two American speakers coming over from the U-S-of-A in May to lecture the Brits about abortion (Beverley Winikoff and James Trussell), or the fact that the UK pro-abortion journal Reproductive Health Matters has an American Editor called Marge Berer, or the recent news that American outfit American Students for Choice will be funding abortion work experience for UK med students at Bpas abortion facilities. The pro-abortion pro-death lobby like using smokescreens, but they are easily blown away.
Posted by Dan B at Wednesday, April 25, 2012